Skip to content
An Android Intent is an abstract description of an operation to be performed. It can be used with startActivity to launch an Activity, broadcastIntent to send it to any interested BroadcastReceiver components, and startService(Intent)or bindService(Intent, ServiceConnection, int) to communicate with a background Service.

There are following two types of intents supported by Android

Explicit intent going to be connected internal world of application,suppose if you wants to connect one activity to another activity, we can do this quote by explicit intent, below image is connecting first activity to second activity by clicking button. 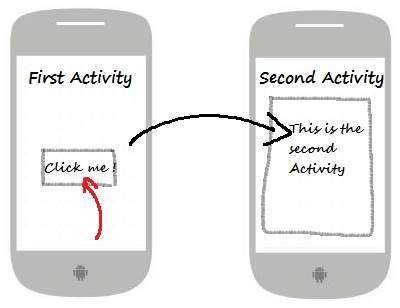 These intents designate the target component by its name and they are typically used for application-internal messages – such as an activity starting a subordinate service or launching a sister activity. For example −